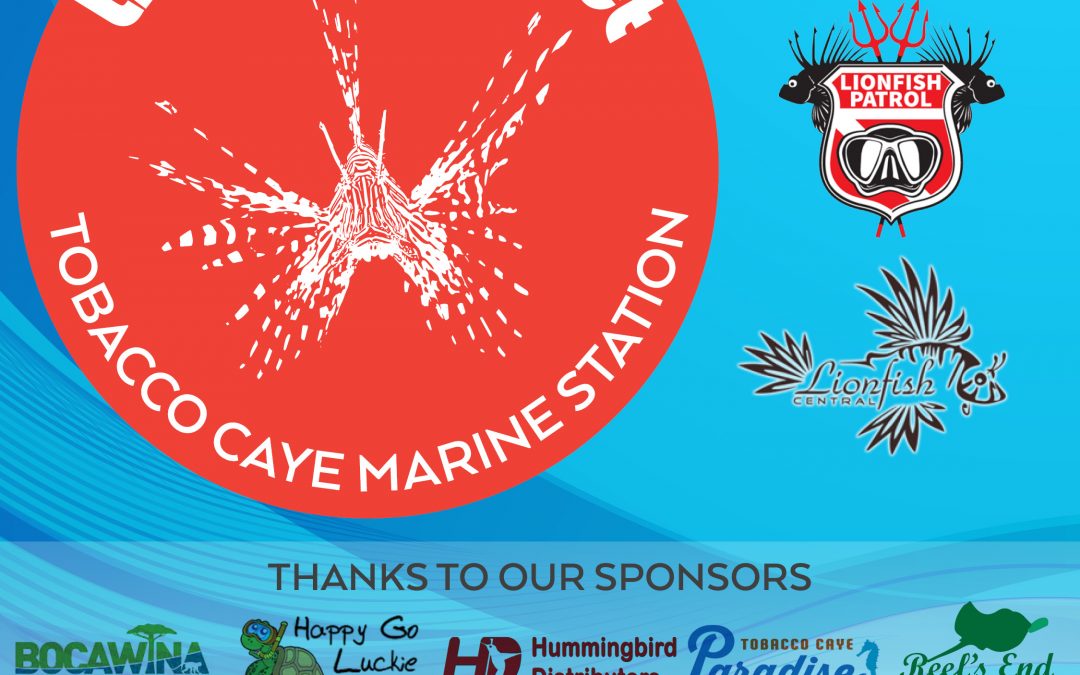 The tournament got off to an early start at 5:30 am, with teams heading out for the first wave of the day. Lionfish tend to be most active from dusk to dawn, so we expected teams to catch the majority of their fish during the first wave. There was a total of four teams, one of which was made up of scuba divers. Two of our interns, Ally and Dale, joined this team to help them during the first wave. Each team had four members consisting of three divers and one boat captain. 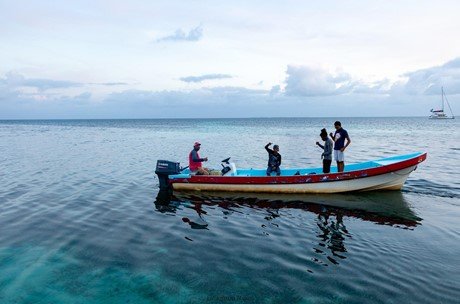 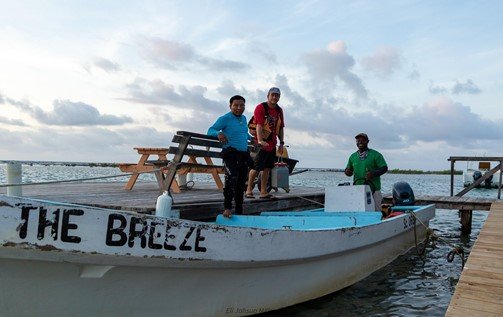 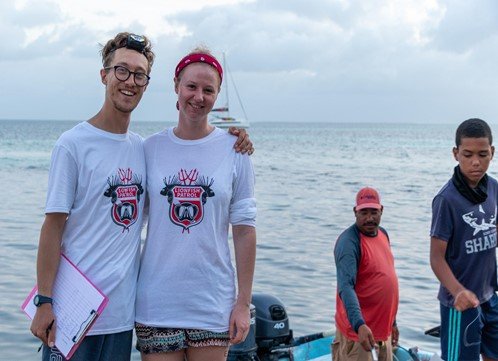 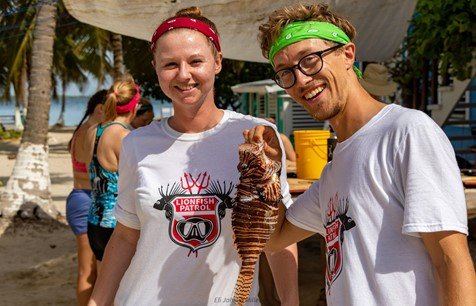 While the teams were busy spearing lionfish, the station staff and interns were finishing setting up the research collection stations. There was a total of four stations to process the lionfish and collect data on their size (length and weight), sex, and stomach contents. At station 1, lionfish were dried off and weighed with their spines still attached. At the second station, an intern would de-spine the lionfish to make them safe to handle. It is necessary to de-spine lionfish in order to safely handle them and prevent stings, since lionfish are a venomous fish. This was the most dangerous station due to the likelihood of being stung. The third station was the measuring station, where the body length, mouth width, and mouth height were recorded. The final station was the dissection station, where an intern would dissect the fish and check its sex and stomach contents. To record the data on each lionfish, we had two data recorders. Station manager Zara was the main data recorder, and recorded lionfish from every wave.

The marine station has been collecting the same types of data on every lionfish they have processed since 2019, so we set up our research collection stations to match their previous data. Recording the weight of a whole fish helps us to determine the maturity of a lionfish, as well as to see what the average size of lionfish caught in the SWCMR is. Measuring the body length also helps to determine maturity. The reason for measuring mouth width and height is to see what size prey a lionfish could be consuming. Lionfish are generalists, so they will eat anything they can fit in their mouths. Dissecting the fish allows us to determine the sex of the fish, and we can also see if egg sacks are present in females. If egg sacks are present, we know it is a mature female and that we have helped prevent 50,000 lionfish from hatching. Looking at the stomach contents shows us how recently a lionfish ate based on the digestion level of the contents. We can also see what species the fish was eating and the size of any intact specimens. 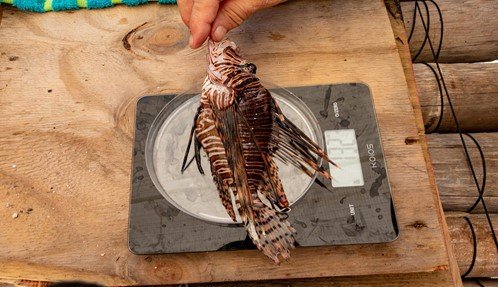 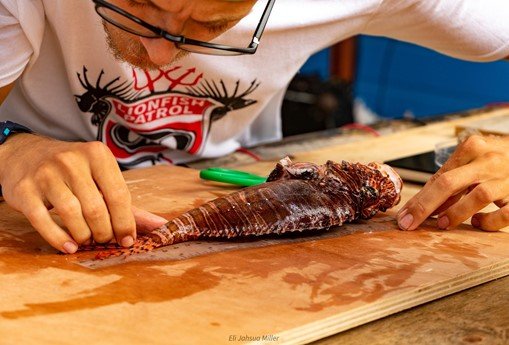 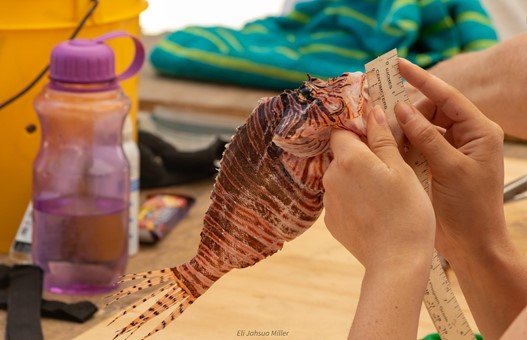 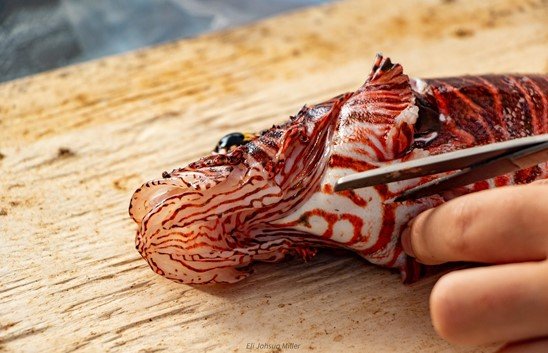 The first check in of the day was at 8:00 am. Team Juan, the scuba team, was the first team back with a total of eight fish. Team Jerome had 24, Team Colin had 34, and Team Fyah had 23. All the teams told the data recorder how many fish were caught, the general location where the fish were caught, what depth they were at, and their behavior. The teams were quick to drop off their catch and get back on the water. After the fish were collected in each team’s bucket, the interns and volunteers started processing and recording data on every fish. The first wave took the longest to collect data on, since the most fish were caught in that time period. 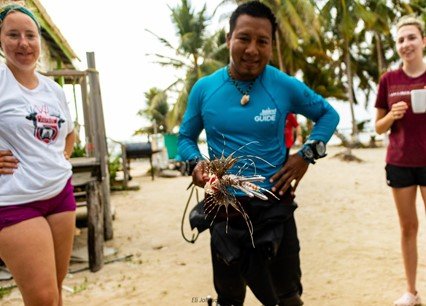 At the 11:00 am check in, Team Jerome took the lead with 25 more lionfish caught. Team Colin caught 17, Team Fyah had 11, and Team Juan speared two lionfish. While dissecting the lionfish from this wave, we noticed that the stomach contents tended to be more digested, suggesting that the lionfish had been feeding overnight instead of during the day. This matched the typical feeding behavior of lionfish. 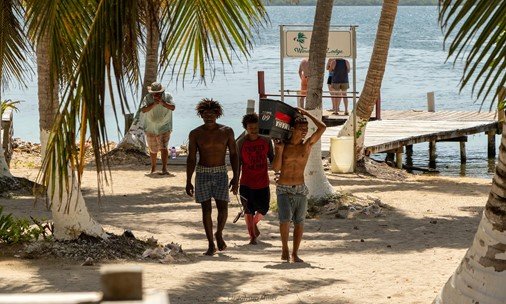 The final check in was at 2:00 pm, and it was a race to the finish. Team Juan came in with three fish, for a final total of 13 lionfish caught whilst scuba diving. Team Fyah had 16 fish in wave three, for a team total of 50. The showdown of the day was between Team Jerome and Team Colin. Team Colin was in first place after the first wave, but Team Jerome snatched the lead in the second wave. Team Jerome came in around 1:45 pm with 24 fish. Team Colin was the final team to the dock, just barely pulling in before the 2:00 pm cut off time. They came in with 28 lionfish in the final wave. Team Colin won the tournament with a total of 79 fish, while Team Jerome came in second with 73 lionfish caught. Team Fyah and Team Juan took third and fourth, respectively. There was a total of 215 lionfish removed from the reef over the course of the tournament.

With all the lionfish captured, we wanted to use the meat instead of letting it go to waste. Lionfish has flaky white fillets that have a buttery, mild flavor to them. It can be used in many different recipes but is particularly good in ceviche. In order to use this meat, we first had a fillet competition. Contestants each started with the same 4.4lbs of whole lionfish with each contestant only having 10 minutes to fillet as much market ready meat as possible, and whoever had the most pounds of fillet at the end won. There was a total of 10 contestants. Led from Reef’s End lodge won the fillet competition, with Rou from Paradise Lodge coming in second. Station manager James came in sixth place. 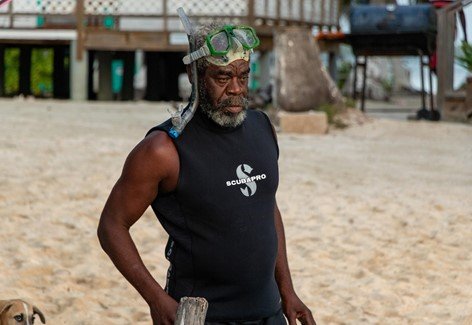 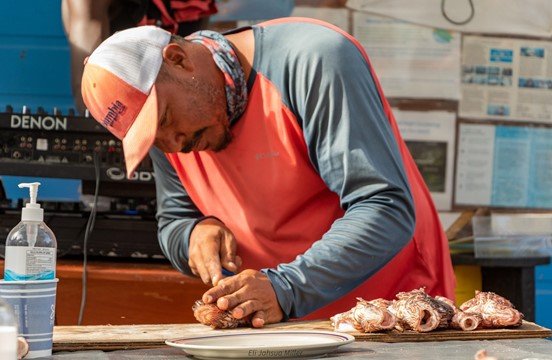 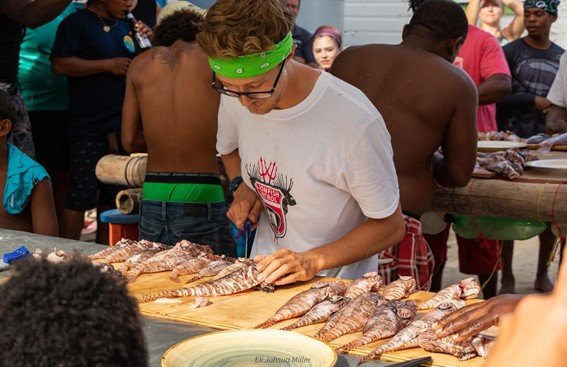 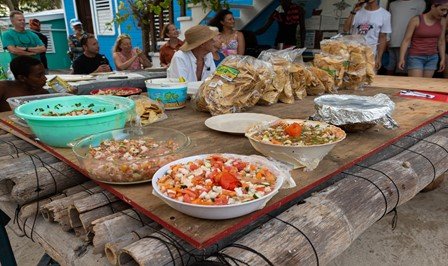 Using the prepared fillet, everyone was invited to use it to create a ceviche dish for the final competition of the day. TCMS provided additional ingredients to use, so everyone was able to enter the competition. Over 10 different ceviche were prepared for the competition. Each ceviche was very unique. Some recipes used avocado, mango, or cucumber. The interns tasted each ceviche and agreed unanimously on the winner. Jackie from Paradise Lodge won the competition with a classic ceviche that was packed with flavor and presentation. The spectators were able to taste all the ceviche, so no lionfish went to waste.