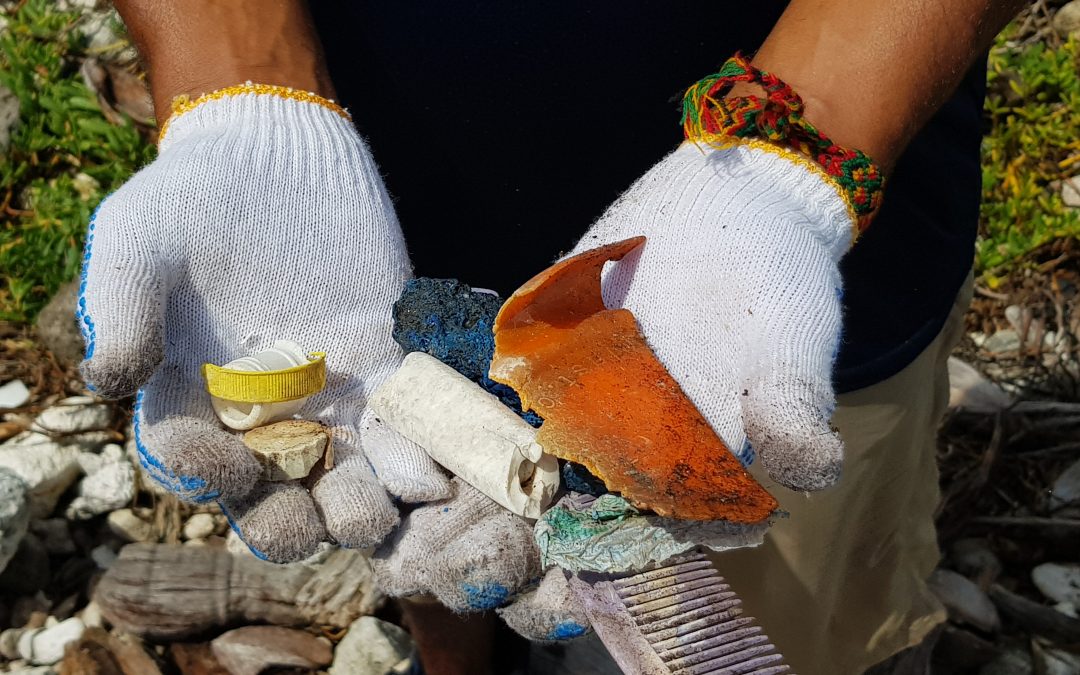 Each year, an additional 14 million tons of plastic infiltrate our oceans, making up 80% of all marine debris.

In 2021, the University of Jacksonville collected 117.75 lbs of trash, the most out of any student group that year.

By collecting trash and recording every individual item collected with the help of many student groups, Tobacco Caye Marine Station has started tackling this plastic problem in its own backyard.

What happens to all this trash once it’s been collected?

The Station has worked to repurpose this plastic, though it is far more challenging to do so with large plastic items. The Station has teamed up with Zane Carney from Jungle Hammer Ironworks to create a plastic shredder that will be the first of its kind here in Belize. This shredder has been specifically designed to function in a corrosive environment such as Tobacco Caye, with a stainless steel mechanical drivetrain full aluminum frame, feeding hopper, and push stick to ensure the safety of the operator regardless of their experience. The machine will also have a bottom catch hopper to enable the plastic chips being removed and stored efficiently. Essential for functioning here on the island, this plastic shredder will be running off of sustainable solar power. This shredder has the capacity to shred most plastics from a bottle cap to a car bumper! The result will be uniformed ¼ inch plastic chips that will be much easier and more effective in repurposing projects, like ecobricks. 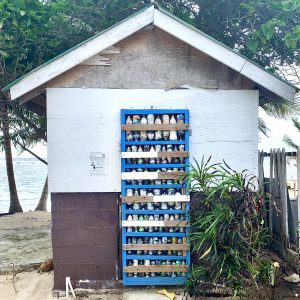 This ecobrick door built by TCMS for a generator shed reduces noise the pollution by 9.2 decibels and consists of 36 lbs of collected trash.

Ecobricks have many benefits that make them great building blocks for so many things. The station uses plastic bottles collected on the reef and following tested methodology packs them tightly with trash that has also been collected. In the past, this has been a timely process as ecobricks are most effective when their density is at minimum 0.33 g/mL. With preshreaded plastic chips, the process of making an ecobrick will be expedited and allow the station to have more of them to use in inventive ways. 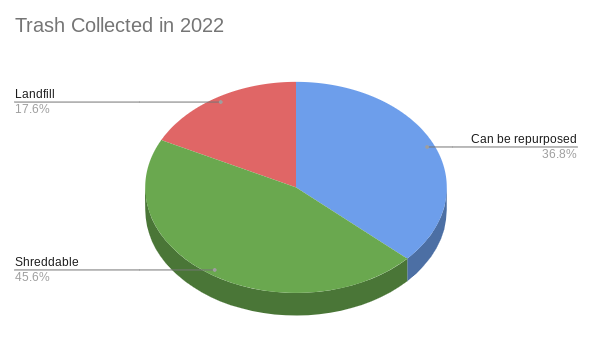 So far in 2022, TCMS has collected a total of 21,316 items of trash. Of all of these items, only 17.6% will have to be sent to landfill. The other 82.4% of all trash items collected thus far will be shredded and/or repurposed by the station, preventing most of the collected marine debris from further degrading the environment.

To further involve the Tobacco Caye community, the Station offers to pay local residents to create and deliver ecobricks. By selling the custom trash collection t-shirts, the Station uses the profit to fund the trash collection project which includes paying the locals for their help. The Station will buy an ecobrick for between $8-25 BZD depending on the size of the bottle. All ecobricks bought by the Station are always weighed first to ensure they are dense enough to function at maximum capacity. Making ecobricks profitable for the community has encouraged residents to collect trash on and around the island because the Station has given what was once “trash” newfound value!

One local resident in particular, Patrick, has created his own ecobrick making operation in his backyard. Not only has he provided the Station with top quality ecobricks, he has also created more ecobricks than everyone else combined. So far, the Station has produced 322 ecobricks and the majority were contributed by Patrick. Patrick’s deicated participation in this project has earned him the nickname “Plastic Man” among residents of the island. Patrick expressed that he intends to start designing his ecobricks to be more aesthetically pleasing, so the Station has begun sorting shreddable plastics by color. Once the plastic is shredded, participants can be more intentional about the design of their ecobricks by selecting and layering different colors. The Station plans to continue raising money so they can pay as many local residents that want to participate, which will be much easier and less time consuming once the plastic shredder has arrived and can break down the plastic for them. 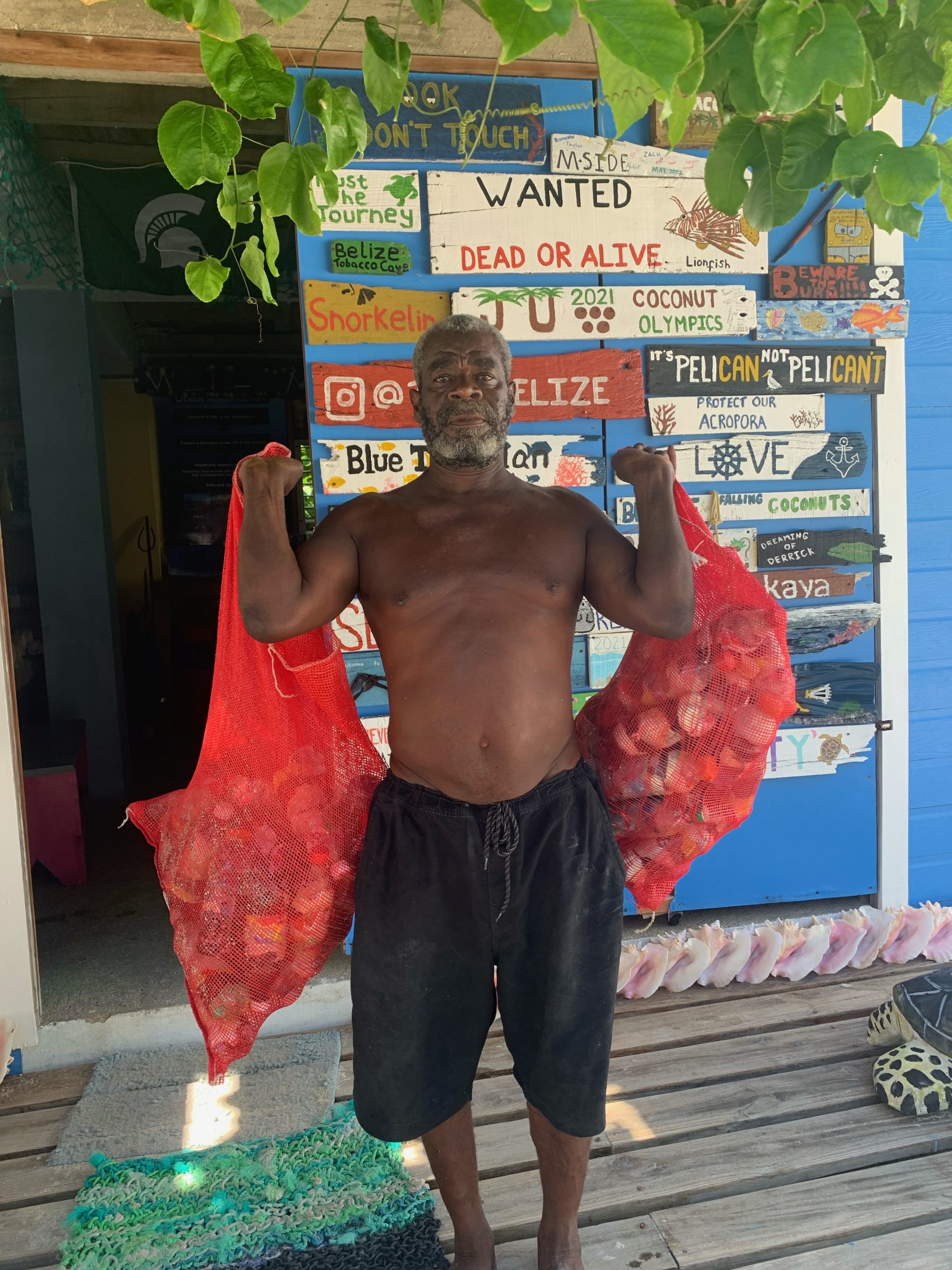 Patrick making his second ecobrick delivery of the week in June, 2022. The Station can always rely on Patrick to stop by after a trash collection from the reef crest and pick up plastic bottles, hard plastic, and soft plastic for ecobricks.

This customized plastic shredder embodies the innovation and collaboration that are necessary to continue tackling complex environmental issues such as plastic marine debris. As expected for intricate and customized technology, the production of this plastic shredder is costly. Tobacco Caye Marine Station kindly asks that you visit this gofundme page to read more about the shredder and donate if you can. We need your help to keep Tobacco Caye trash free for all residents of the island, tourists and marine species! 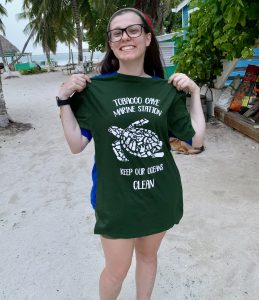 TCMS student with the custom trash turtle t-shirt, avaible for $40 BZD in our gift shop or our online shop. 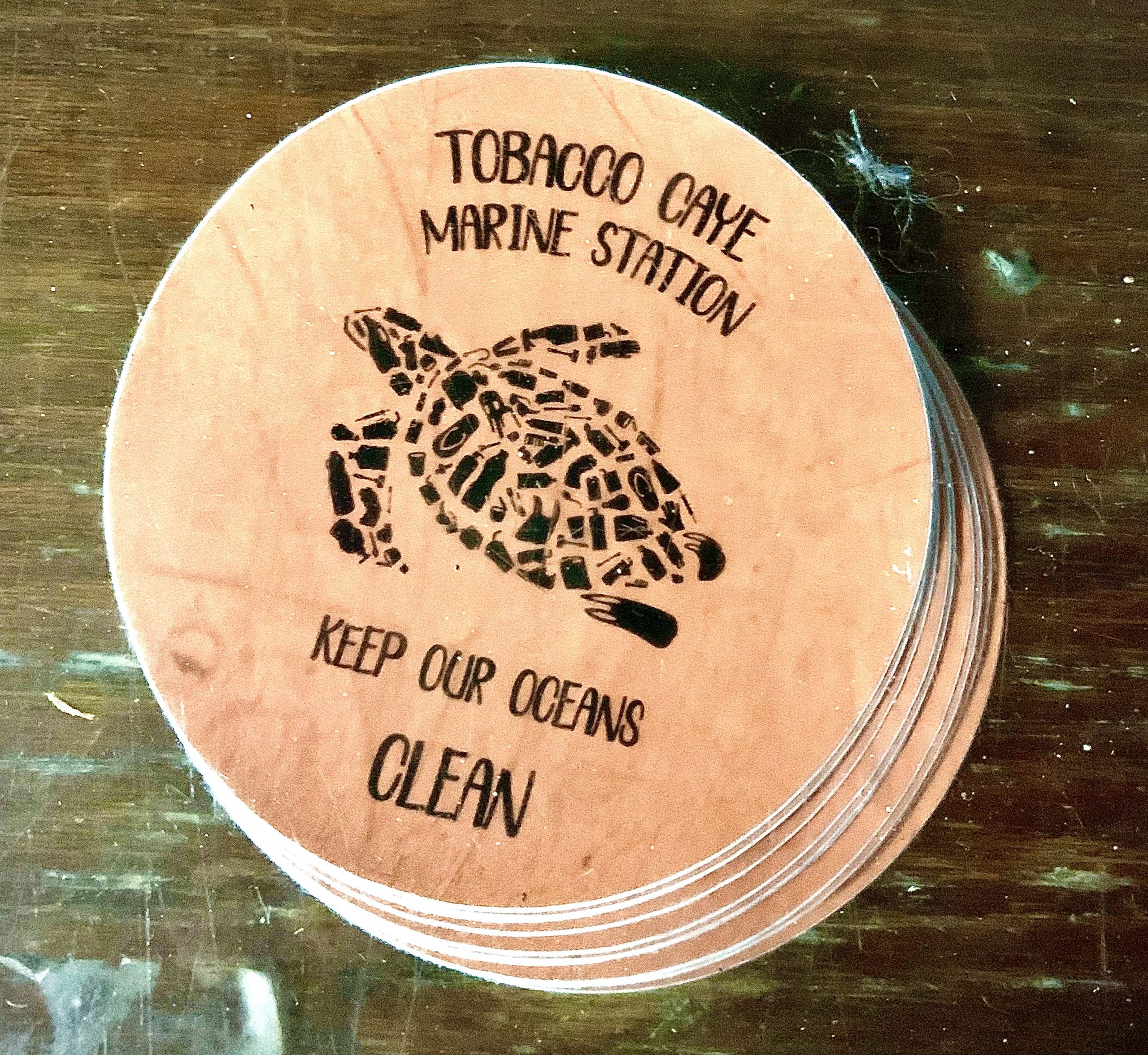 The TCMS custom turtle is composed of trash items collected during reef cleans and is avaible as a sticker, for $10 BZD, which can also be purchased in the gift shop.

WE NEED YOUR HELP!